We live in the age of empowering.

Humans want to empower one another and for everyone in the world to have fair access to basic rights and opportunities to education, employment, food, and health.

Qurban is an opportunity to empower societies in poverty.

Empowerment is when someone is given the power, ability, and skills to do things. They strengthen their skill set, become more learned, and know-how to apply their knowledge.

The Sacrifice, known as Udhiya in Arabic and Qurban in Turkish and Persian is an Islamic tradition that takes place annually.

On the days of Eid al-Adha, Muslims around the world slaughter an animal (either a goat, sheep, cow, bull, buffalo, or camel). The animal flesh is cut, cleaned, and distributed to those in need in commemoration of the sacrifice of the Prophet Ibrahim.

However, immediate aid isn’t enough to relieve poverty-struck societies. In the long term, aid            agencies should empower and develop communities so that they are no longer dependent on              direct aid.

The meat product is just a part of a more significant process. Qurban gathers and empowers                locallivelihoods. Farmers and locals prepare and grow the animals in advance for the Islamic                tradition.

Slaughterhouses will sacrifice the animals, local butchers will assist in cleaning and package the          meat, and transporters will distribute the meat to families in need. 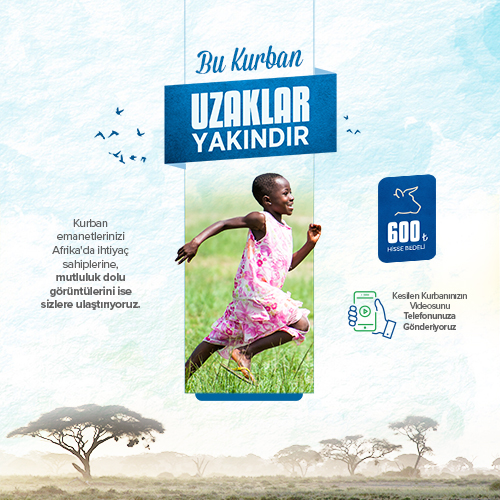 Iyilik Denizi Foundation looks at Qurban as a way of supporting a local community by empowering local livelihoods by employment. At the same time, it strengthens local economies and feeds its most vulnerable.

So yes, it may be cheaper to purchase or outsource your Qurban in Turkey – but this misses the whole point of why we even hold Qurban.

Meat Packet. The project involves the distribution of fresh packets to the most vulnerable people – women, children, the elderly, and refugees.Each meat packet distributed contains a sufficient amount of meat (4 kg on average), for a family of four for one week. Each meat packet is designed to consist of fresh meat that is appropriate and acceptable for the dietary culture of the region.

Iyilik Denizi’s Udhiya/Qurban campaign is recognized for its ability to create employment opportunities for societies in poverty and for distributing fresh meat to millions of the world's most vulnerable.

Those who receive the Qurbani meat include widowed women, orphaned children,            refugees, and poor, elderly, or disabled people.
For the majority of these people, meat is not part of their regular diet.
Qurbani meat allows some families to eat meat after a whole year.
When families receive Qurbani meat, it fosters a real sense of hope for them and              allows them to celebrate this important occasion along with millions of other Muslims        across the world.
This year, we will continue to enable poor people around the world to celebrate Eid-al-    Adha.
You can help: Give your Qurbani with Iyilik Denizi today.