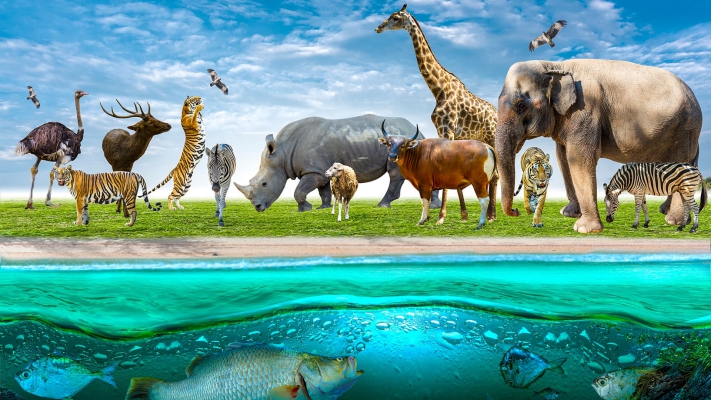 Humans and animals have lived side by side for thousands of years. Animals enrich our lives and help us understand the natural world around us.

Animals are our companions, our workers, our eyes and ears, and our food. They appear in ancient cave paintings, and on modern commercial farms. We have domesticated some of them, while others remain wild and are sometimes endangered by our activities. They keep us company, and while they can provide comic relief, they also serve us as valuable assistants.

Life is very vivid to animals. In many cases, they know who they are. They know who their friends are and who their rivals are. They have ambitions for higher status. They compete. Their lives follow the arc of a career like ours do. We both try to stay alive, get food and shelter, and raise some young for the next generations.

Animals are no different from us in that regard and their presence here on Earth is tremendously enriching.

We share our planet with millions of species of plants and animals - a wondrous variety of wildlife that enriches our lives in so many ways.

But our planet’s wildlife and animal diversity is in crisis – numbers have fallen by more than half since 1970, and species are going extinct at an alarming rate.

We are pushing our planet to the brink. Human activity—how we feed, fuel, and finance our lives—is taking an unprecedented toll on wildlife, wild places, and the natural resources we need to survive.

On average, we’ve seen an astonishing 60% decline in the size of populations of mammals, birds, fish, reptiles, and amphibians in just over 40 years, according to WWF’s Living Planet Report 2018. The top threats to species identified in the report link directly to human activities, including habitat loss and degradation and the excessive use of wildlife such as overfishing and overhunting.

The report presents a sobering picture of the impact human activity has on the world’s wildlife, forests, oceans, rivers, and climate. We’re facing a rapidly closing window for action and the urgent need for everyone—every one—to collectively rethink and redefine how we value, protect, and restore nature.

We need to reverse this loss of nature and create a future where wildlife, animals, and people thrive again.

Wildlife is disappearing on every continent, in every ocean, on land and underwater.

Human actions threaten wildlife in two main ways: by destroying and damaging the places where species live, and by using them in ways that are unsustainable.

Vast areas of natural habitat continue to be lost to agriculture, urban sprawl, mining, and infrastructure or are suffering from the effects of pollution, introduced species that often out-compete native wildlife, and, increasingly, climate change.

Meanwhile, many species are declining because of unsustainable levels of hunting, fishing, and harvesting. Others are being driven toward extinction to support the international wildlife trade or killed when they come into direct conflict with humans and livestock.

In a matter of fact, each organism on Earth has a unique place in the food chain that actually helps contribute to the ecosystem in its own special way.

For us as humans, it becomes a great responsibility and obligation to protect the animals, plants and the whole wildlife.

Because millions of people depend on animals

Because we all have the power to improve animal welfare

Because a sustainable and worthwhile future for the planet can only be achieved if both people and animals are part of it.

We conserve animals because they serve important parts in nature. They all have their jobs which they perform to maintain a harmonic balance in nature.