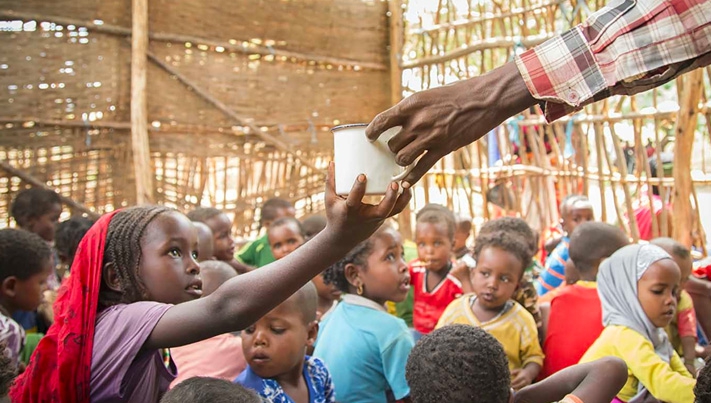 For food aid to be more effective, donors need to consider both the aid's goals and its economic consequences.

In May 2012, shortly before the annual G8 summit, the Obama administration announced the "New Alliance for Food Security." The project involved 45 private companies that would invest in food production in some of the world's poorest countries.

The availability and affordability of food in developing countries is a constant concern, and malnutrition kills about 2.6 million children annually.

Following the 2007-08 food crisis, many donors made a renewed commitment to food security. If projects such as the New Alliance for Food Security, bilateral and multilateral donor interventions are to be successful, a number of aspects must be considered regarding their implementation.

In his UNU-WIDER working paper “Foreign Aid and the Food Crisis of 2007-2008,” Phillip Abbott addresses this practice issue and highlights a number of key issues that policymakers should keep in mind when designing and managing mitigation projects.

Draft documents released prior to the May 2012 G8 summit confirmed the groups' commitment to addressing food security and outlined their goals as "improving agricultural productivity, economic growth, food security and nutritional status."

While all of these goals are admirable in their own right, care should be taken where these different goals may conflict.

In the aid literature, economic growth is often assumed to be the appropriate measure of aid's development effectiveness. However, as Abbott points out, the aims of food aid are often humanitarian.

Investment in agricultural production may not be optimal in terms of maximizing growth, but any growth that results from such investment is likely to be more equitable and lead to poverty reduction.

However, if too much emphasis is placed on humanitarian goals, the resulting policy reach may be short-term in nature. During the recent food crisis, aid for short-term solutions to provide food transfers and cash safety nets likely exceeded long-term investments in agricultural production.

In fact, even investment in agricultural production was short-term in nature, focused on fertilizer and seed imports rather than agricultural research or institutional development. Abbott argues that a careful balance must be struck between the multiple goals of donors if long-term food security is to be achieved.

A related issue is the disagreement that may exist between donors and recipients over the appropriate goals of aid to improve food security. In the wake of the food crisis, donors largely wanted to focus on building the capacity of small farmers and alleviating extreme poverty. However, recipient national governments were more focused on mitigating consequences for much larger segments of their populations and less concerned about agricultural development.

The UN food security senior task force estimates that $40 billion a year will be invested for agricultural production to grow fast enough to meet the world's food needs.

Foreign aid is barely meeting this need, and so projects like the New Food Security Alliance, which seeks to strengthen private sector investment, have the right idea (although the success of this particular project is yet to be seen). We are still far from the 40 billion mark, and agriculture is largely a private sector industry.

It is concerned with whether meeting future world food needs requires a supply- or demand-side solution. The demand for food in the sense that people need is clearly not a problem. But in the past, malnutrition has persisted despite excessive global food production. The problem then is to create effective demand.

Advocates of increased international support should offer donors a more united front. Debate is both inevitable and essential, but a more systematic economic assessment sensitive to the environmental consequences of the various alternatives will lead to more productive and less divisive dialogue.

So there are many issues that donors as well as analysts should consider when considering the role that foreign aid can play in improving food security. Food aid and agricultural development aid will become more effective if performance in the areas discussed above can be improved.

Food banks function as giant warehouses for large quantities of food that are donated or purchased in bulk, which are then distributed among food pantries – smaller community operations responsible for getting food into the hands of the people who really need it. There may also be smaller independent organizations near you, often run by religious organizations or places of worship.

Generally speaking, "giving financially is the most effective way to provide food aid because food banks have more purchasing power than you or I have," Fitzgerald says.

Fitzgerald explains that food banks can be helped more sustainably because they can secure large quantities of food at discounted prices and buy exactly what is needed. In addition, food banks can most efficiently purchase perishable goods that would otherwise go to waste, such as farmers' leftover produce; so they can provide people with a greater variety of fresh food and reduce food waste.

Monetary food bank donations also make things more logistically efficient – ​​eliminating the possibility of not having space for a large, unexpected flow of goods, as well as the time it takes to sort and inspect donated food – which is especially vital right now. There may be limited staff and volunteers.

Donate Food If You Don't Have Financial Aid Opportunity

While financial contributions are most effective, if it's food people can give, give that food. Think of shelf-stable dry and canned goods such as beans, rice, pasta, soups, peanut butter, and cereal that you buy at the grocery store or keep in your cupboards (just check the expiration date).

Volunteer at a local Food Bank.

Food banks rely heavily on volunteers to operate; According to Feeding America, 51% do this entirely. Fitzgerald says the pandemic has created staffing shortages because volunteers are often older and more vulnerable to serious COVID-19 complications, and about 60% of Feeding America food banks currently need volunteer support.

You can share various posts by following and tagging the Instagram address of the Sea of ​​Goodness Association. Those who cannot provide financial aid can make social media posts that will raise awareness.